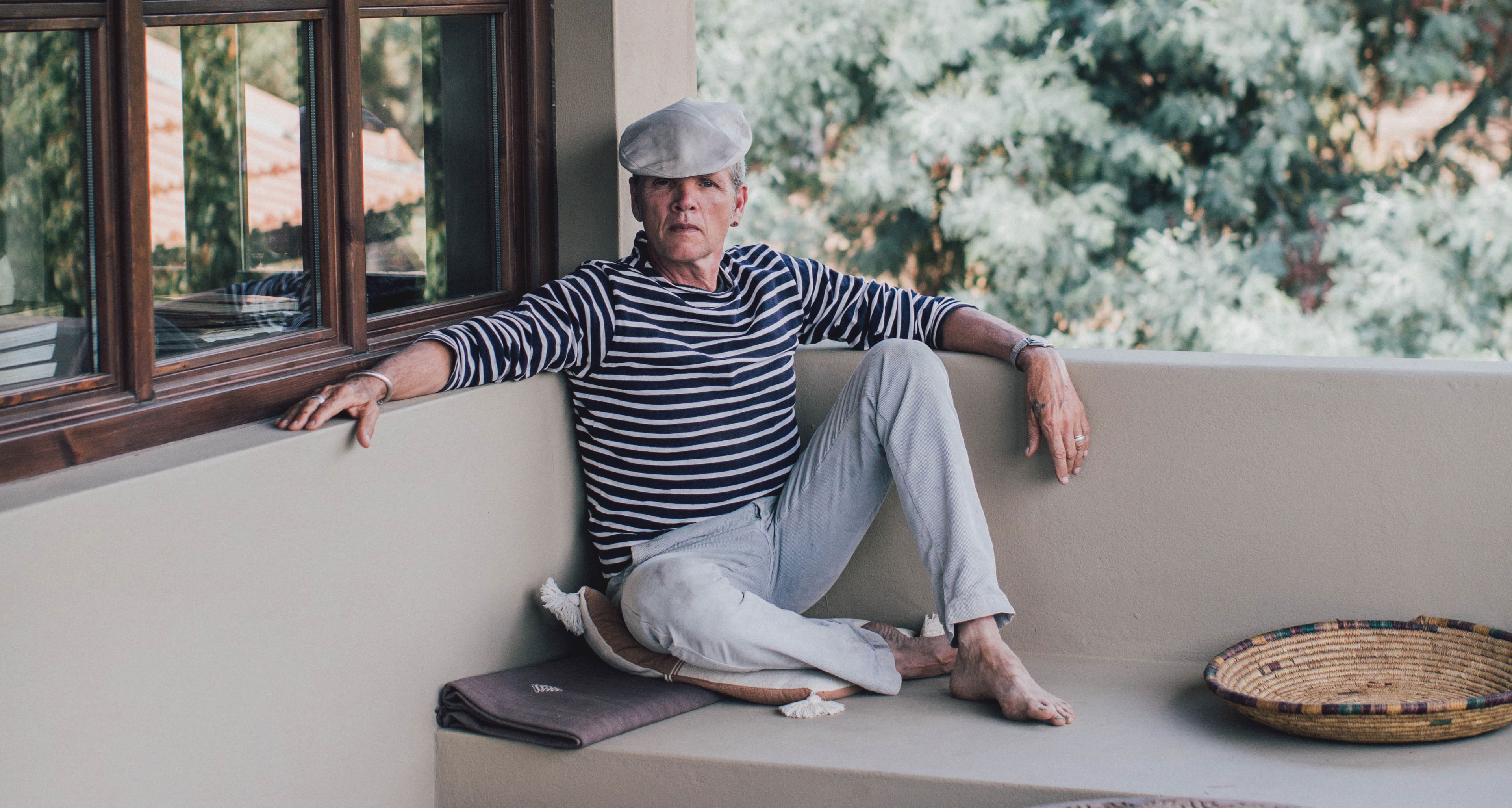 Hanging with the likes of Andy Warhol, Madonna and Liza Minelli should be enough to keep anyone busy, but during his tenure in New York downtown nightlife, Marcus Leatherdale also documented the scene through his classic medium format photography. Being the partner of artist and photographer Robert Mapplethorpe, Marcus landed on the East Coast in 1989 and has never looked back since.

I first discovered Mr Leatherdale’s work through his “Hidden Identities” series that ran in Details Magazine. Before it became a menswear title, the publication was at the cutting edge of culture and photography was it’s pillar of strength. Capturing the likes of Debbie Harry and Jodie Foster alongside unknown characters from Downtown NYC, he found their essence with nuance and intrigue. As a portrait photographer myself, I love to investigate work that presents individuals in a new way, which is the reason these images always stuck in my mind.

Getting the chance to photograph him today is truly an honour. Sitting in the wilderness looking through his archive, it seems more appropriate than ever that the photographers memoirs are being compiled. In the 40 years since Marcus Leatherdale first made his mark in New York, it’s apparent that the significance of the time is as important as ever.

Splitting his time between urban and rural life, I photographed Marcus on his estate in Portugal, a tranquil spot surrounded by acres of forest. 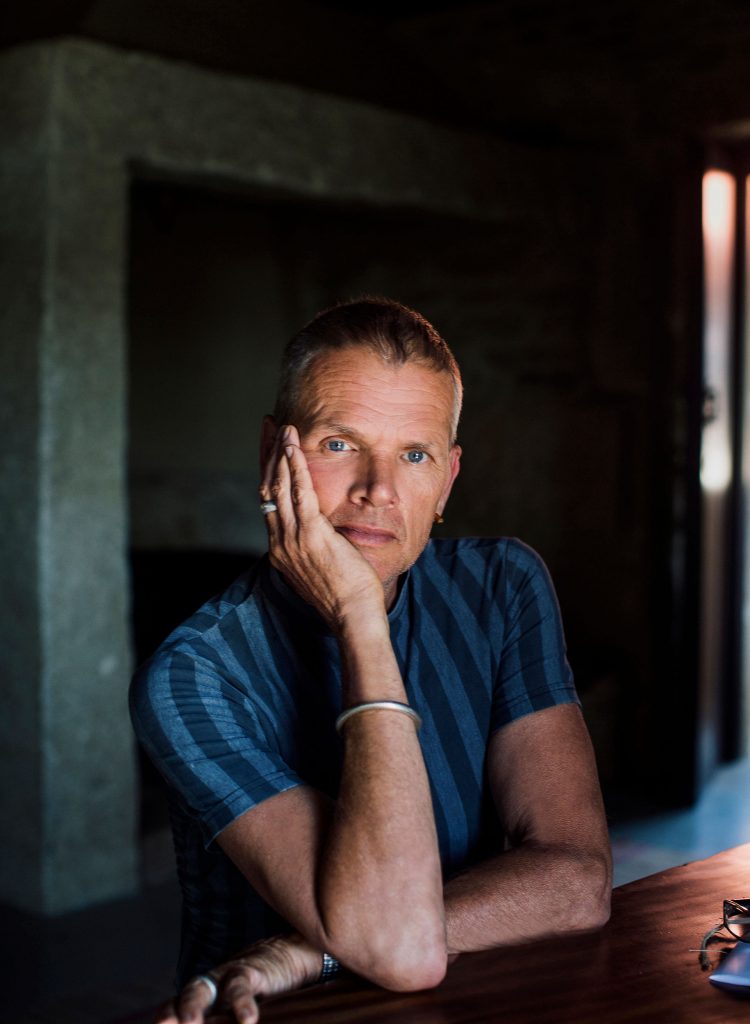 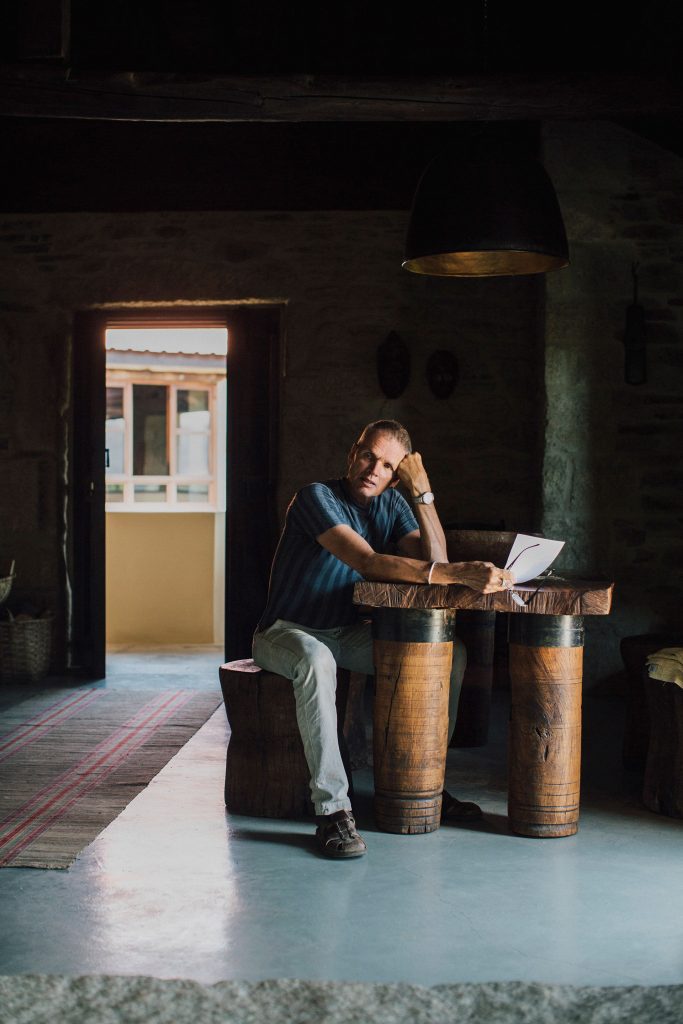 Where did you grow up?

I was born in Montréal, Québec Canada. Father of veterinary surgeon, mother a gorgeous housekeeper.

How was your childhood?

I had wonderful parents. Privileged, well-off and an absolute terror of an older brother. We moved around a lot so I was always starting at new schools. There was a stretch from grade 3 to 9 where I actually had stability and three friends that I hung with. Other than that, school was absolute hell.

Do you think there’s anything about being bullied, it being hell that sort of makes you…

Stronger? What doesn’t break you make it stronger? No, I think I could’ve done without it. I don’t think I needed to know how unique and different I was by constantly being bullied for it. I think I could’ve figured that one out without it being smashed in my face. I guess, it did make me stronger, but it got pretty intense. I was taken out of school for it. I remember my father marching me out of school to a psychiatrist because they were afraid I was going get my ribs broken.

What did you want to be as a child?

I didn’t have any goal. I knew I wanted to be an artist of some sort. I was actually suicidal at 15 because I thought there was no future. Luckily my mother was clairvoyant about it and she came home to find me overdosed on sleeping pills. She left the hairdressers with curlers still in her hair to come and find me. I never saw myself as an adult, but now I’m stuck!

Were you supported as a creative young person?

Absolutely. My father never expected me to be a doctor and my mother used to paint and sing. They always assumed I was going to be an artist and they were very encouraging. I knew I’d go to art school – I didn’t have to fight to not be a lawyer. 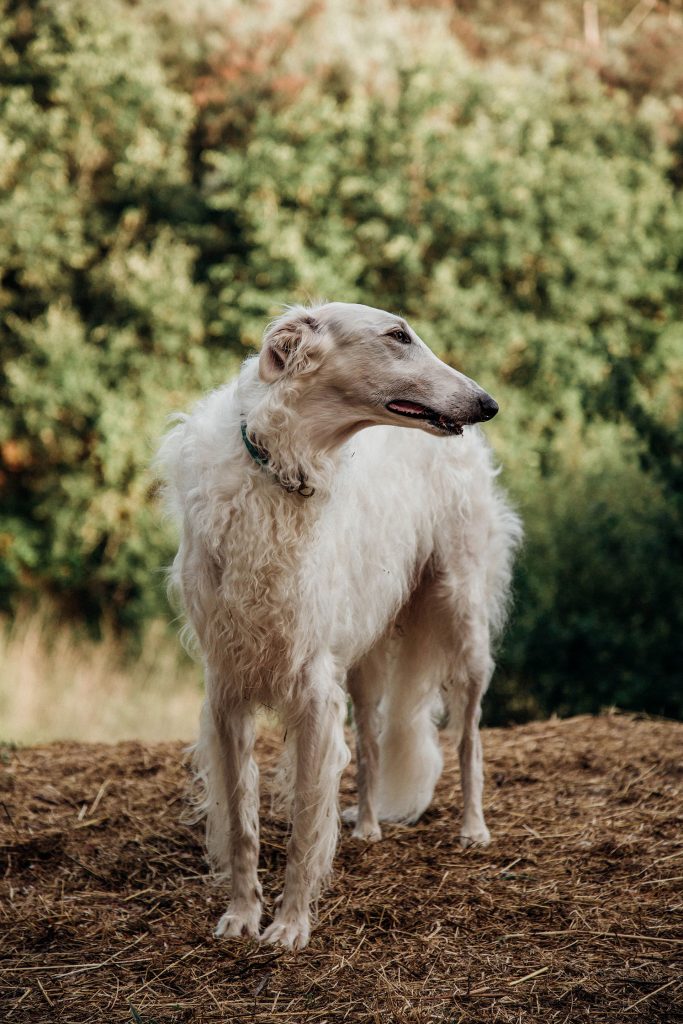 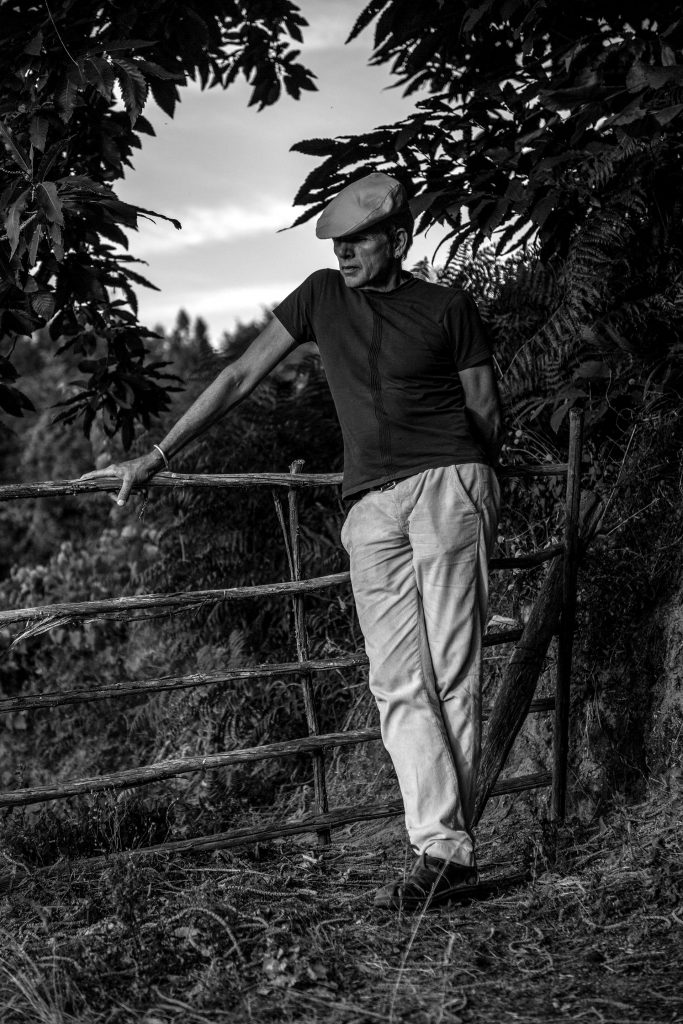 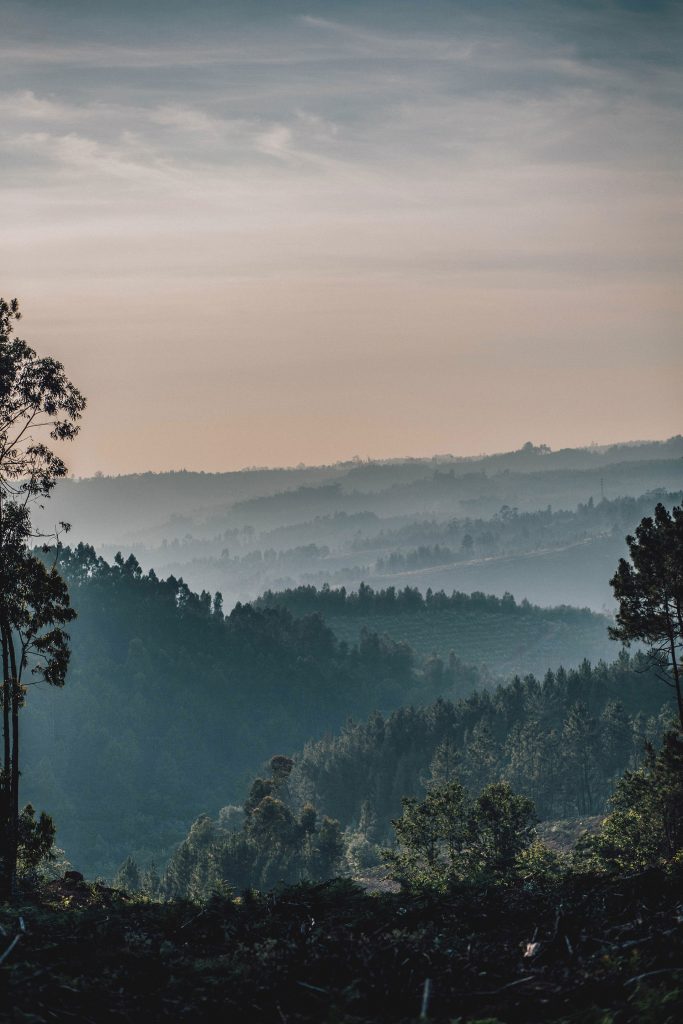 Did you always know it would be photography?

I didn’t even know what photography was. I went to École des Beaux-Arts, as a fine arts major. Within a year the Dean of the school introduced photography, animation and film — so it took a course in each of those, in fact it went from painting forward. With painting I realized I was impressionistic, and didn’t have the skills to do detail – and when I realized detail was a big issue, I thought why in hell would I spend so much time and energy learning to do detail when I can capture it in a photograph. So I shifted.

Later, at the San Francisco Art Institute — where I went for film, I switched to photography, even though I was an honour student as a painter and actually won the award painting out of my class that year, which was awarded by the teacher who was also a successful artist. He kept encouraging me to stay and paint. I was the only photographer at the institute that would turn up to photography class covered in charcoal. I’ve always approached photography as an alternative artistic medium and I never thought of photography as commercial. I never wanted to work for Newsweek or be a Playboy centerfold photographer. The only magazine that interested me was Interview, but that was an Andy thing.

That period of time it all sounds so organic and natural. Did you consciously talk about work, creating, shoot ideas or did it just flow?

Nothing was pre-conceieved. This was a time for me when my trust fund was cut and I had to get a job so Robert Mapplethorpe and Sam Wagshaft, who had the largest photography collection in the world, hired me. I never discussed things with Robert in detail, unless I had to assist him on a rare occasion on location, for example when we shot Truman Capote at the UN. Working with Sam was amazing as all of a sudden all the slides that were flashing in front of me while I was at Univerisity were sitting in my hards. The Penn’s, the Steiglitz, the Avedon’s. I had to organize then with little filing cards and be placed in a flat drawer. That was a very privideged position. 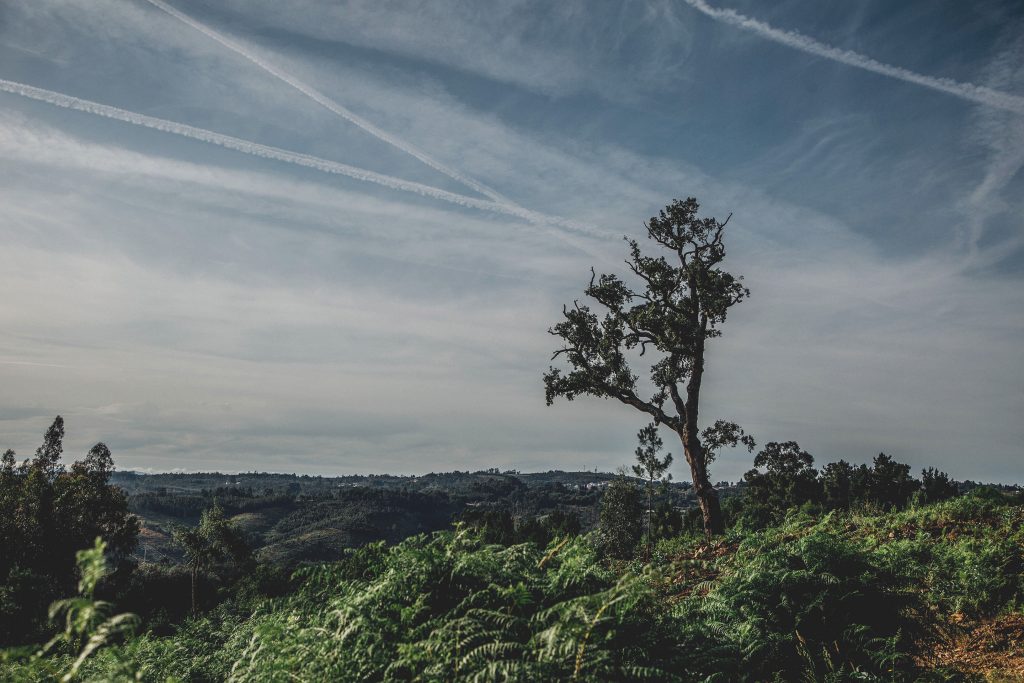 How did that influence your own work?

It gave me a sophistication. A reference as to where things came from. My inspiration always came from painting and not photography although I always love Sanders and Penn. It was truly Rembrant and Modigliani that impressed me, their use of light.

A lot of your story is about this incredible world you lived in – the people, the places. Did these early experiences like meeting Truman Capote change you?

It humanised celebrity. When I met Capote, I had read everything he’d written and then I met him he was this sad, little old lonely Grandma in a tiny apartment that stank of hard boiled eggs. Also I came to New York with Mapplethornpe who’d photographed my idols – Patty Smith and Lou Reed – both turned out to be completely neurotic and I intimidated them on some level or another. It did make things more real and easier for me not to be star struck. Celebrities know ass-kissers and they can never become true friends. 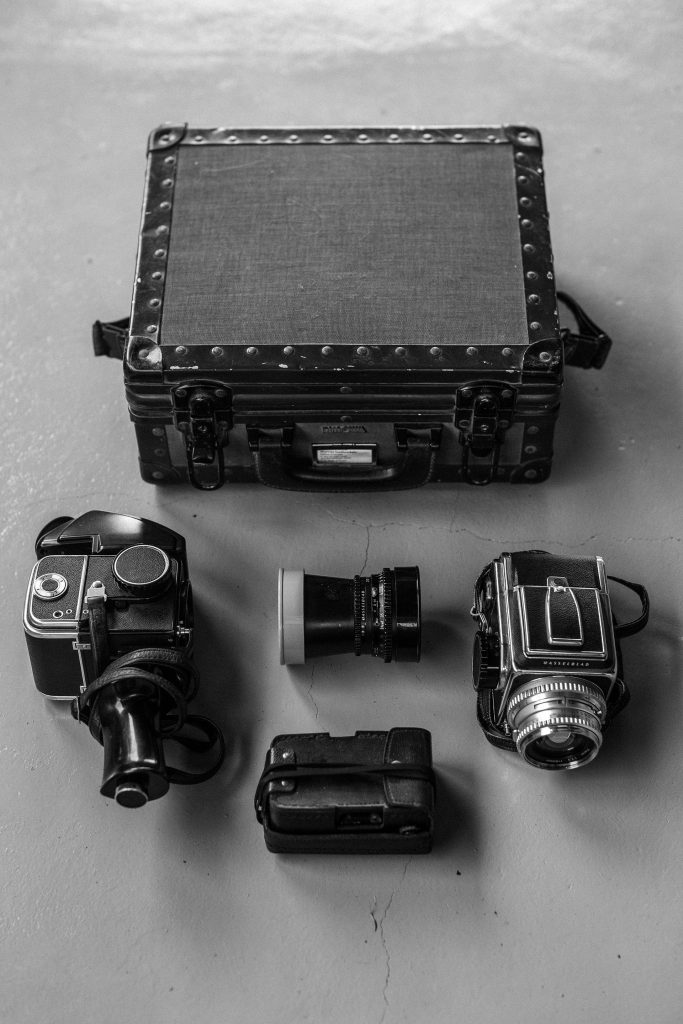 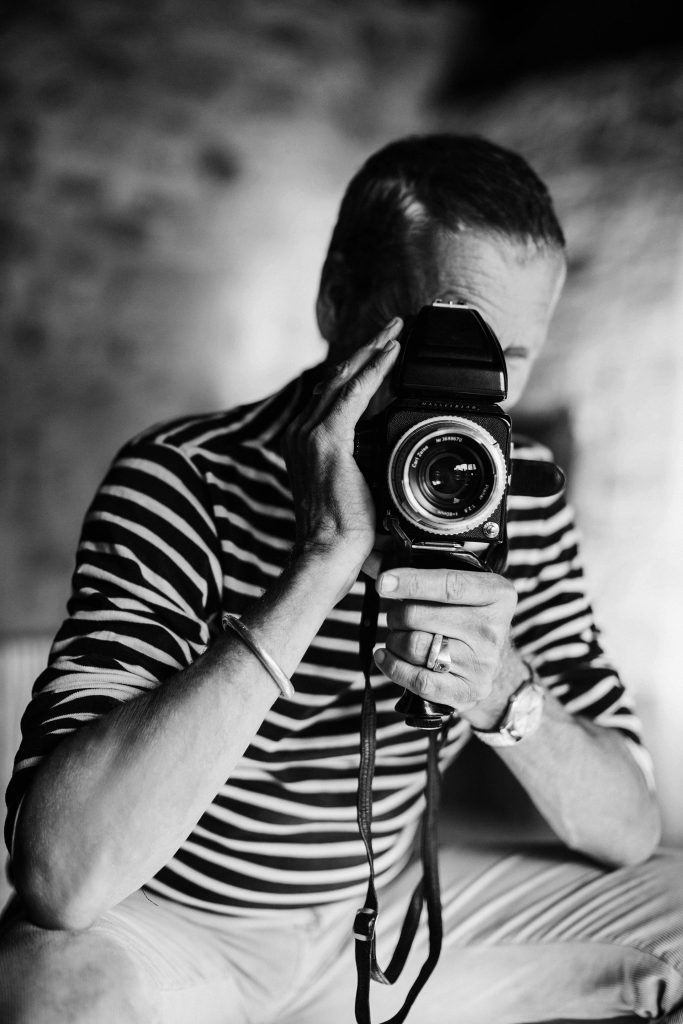 Was there any memory of New York that really made an impression of you?

I remember one time YSL gave a party for the launch of Opium at the Peaking Yacht and it sat on the harbour with a long runway. I went with Robert and I didn’t own a tuxedo. I was black tie from the waist up and leather pants from the waist down. I’d also just shaved my head which was unusual. It was amazing, we walked down a runway with rose petals all over the place and hooked up with Paloma Picasso and Saint Laurent. That was impressive. I was a punk then so when everyone started to dance I began to pogo dance. It caught the attention of a girl who later became my very close friend Larissa. She was head to toe in gold lame that night and gave me my first experience in a limo when she picked us up to go onto Studio 54. We got shitface drunk.

How did Hidden Identies come about?

I was at the Mudd Club upstairs and I ran into Steven Sailen who was the downtown chronicler for Soho Weekly News. My first picture ever published was a picture of Mary Lou Green who was artistic director of Vidal Sasson. He’d seen it so asked me if I’d like to do the profile photographs to illustrate his weekly articles. It was $35 a week. That’s how it started and continued for about a year until the paper was sold. He started Details Magazine with Annie Flanders and asked me to contribute. There was a Dada night called Underground at that time and I took the gogo cage and made it into a studio for unidentifiable portraits. Dadaism always spoke to me. I almost never went to my Art History class all year and by the end I had to write a paper on the Dada era. I had no idea so took crayons and wrote “Dadadadada”on 20 pages of paper and handed it in. I got an A+ and thought “ok, Dada’s working for me”. After that Dada night of unidentifiable portraits Steven came to me and suggested “Hidden Identinties” There was an understanding that I didn’t get told who to photograph and when it started there was a feeling that if you didn’t know who it was you weren’t cool enough. As time went on it would start being revealed in the next issue and finally came instant gratification where it was written in the back of the magazine. As it became more international it had to be more than just the kids on the tabletop of Pyrimid and more recognisable like Jodie Foster. That went on from’ 82 to ‘90. That helped me to go anywhere. Everyone wanted to be a hidden identity. I turned down the likes of Grace Jones because I knew she’s be 3 weeks late.

Did anyone stand out from you as a subject?

Leigh Bowery turned up in full drag in the middle of the day. He wore a beaded mask, a busier, silver boots and a vagina merkin. Butt naked otherwise. Broad daylight. Turned up at my door. I acually never met him without a mask so at the time didn’t even know what he looked like. He couldn’t have been more of a gentleman. We left together and went down to Broadway and hailed a cab. Two or three went past but one finally stopped. Hailing cabs for these people was the most fun thing.

Did any not make it in the magazine?

We shot hundreds. Madonna and Debbie Harry didn’t make it in. That’s because Detail’s was sold and became a men’s magazine. 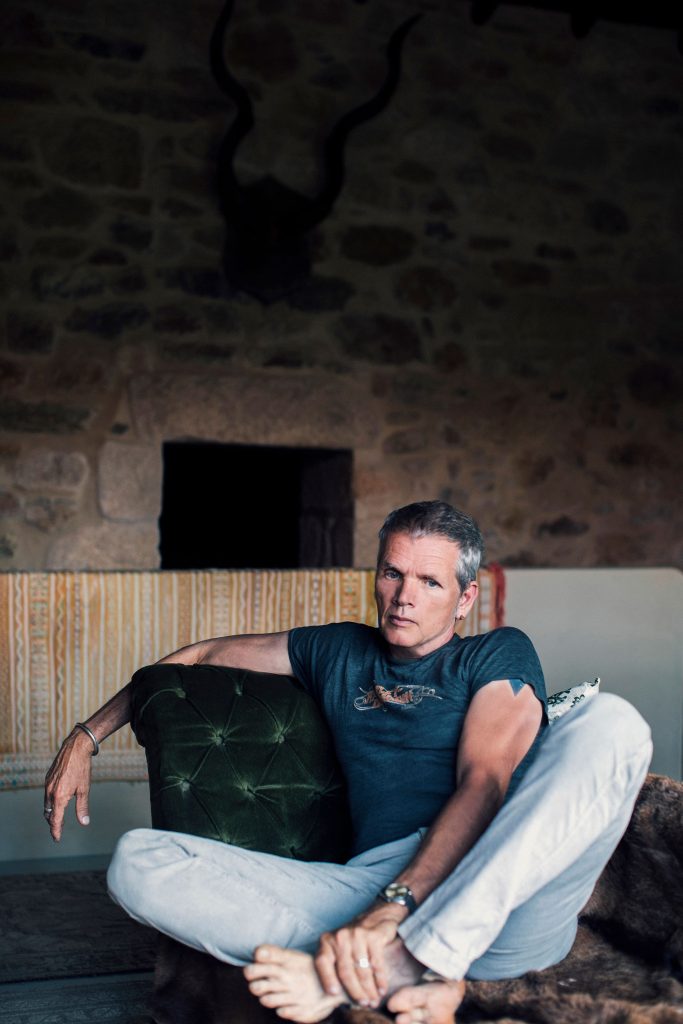 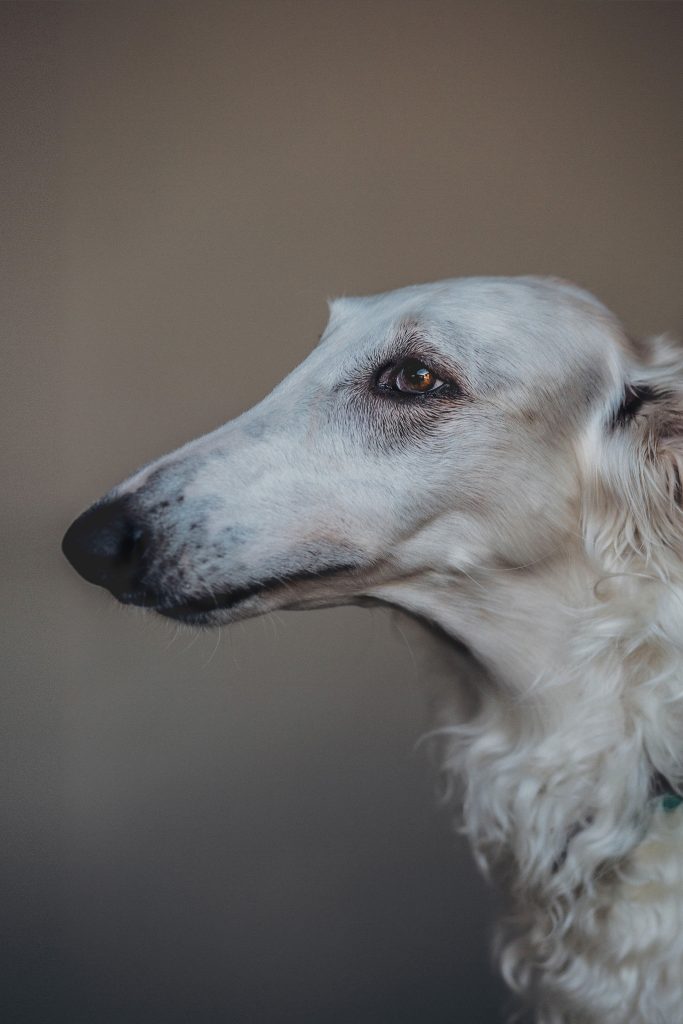 How many frames do you take in a session?

About 3 to 6 rolls of 12 per roll. That would just be a warm-up for a digital guy. I use a Hasselblad 500c/m. The only one for professionals.

What do you think makes a great photograph?

It’s an internal dialogue. Showing, touching or saying something. It’s art to me. If I had to pick my five favourites of my own, they would likely not be the famous subjects. It doesn’t have to be who it is in the picture. 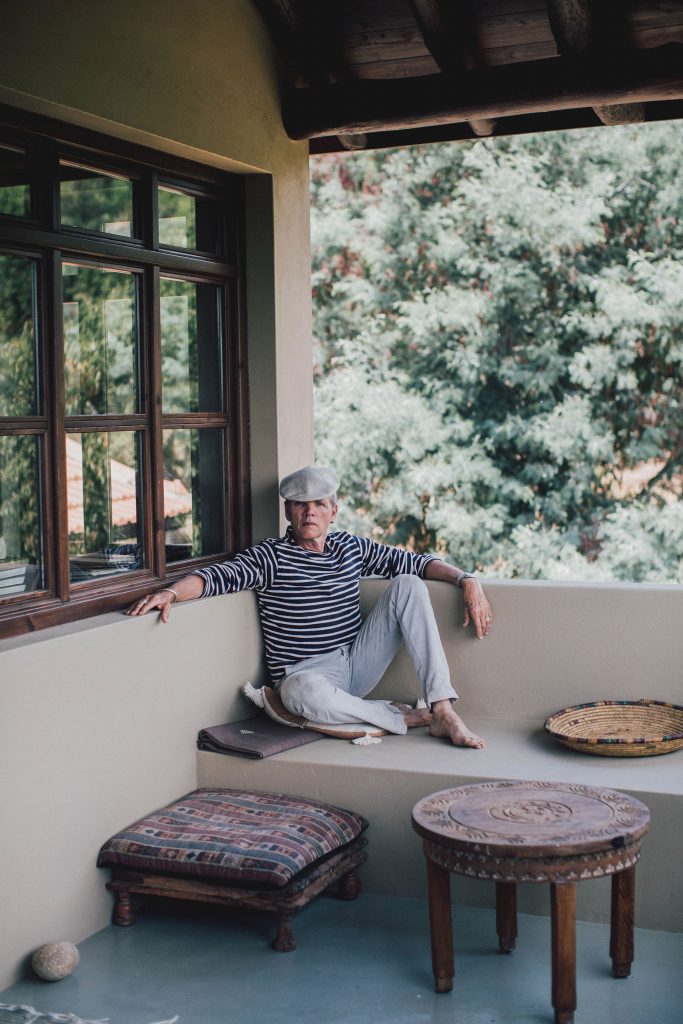 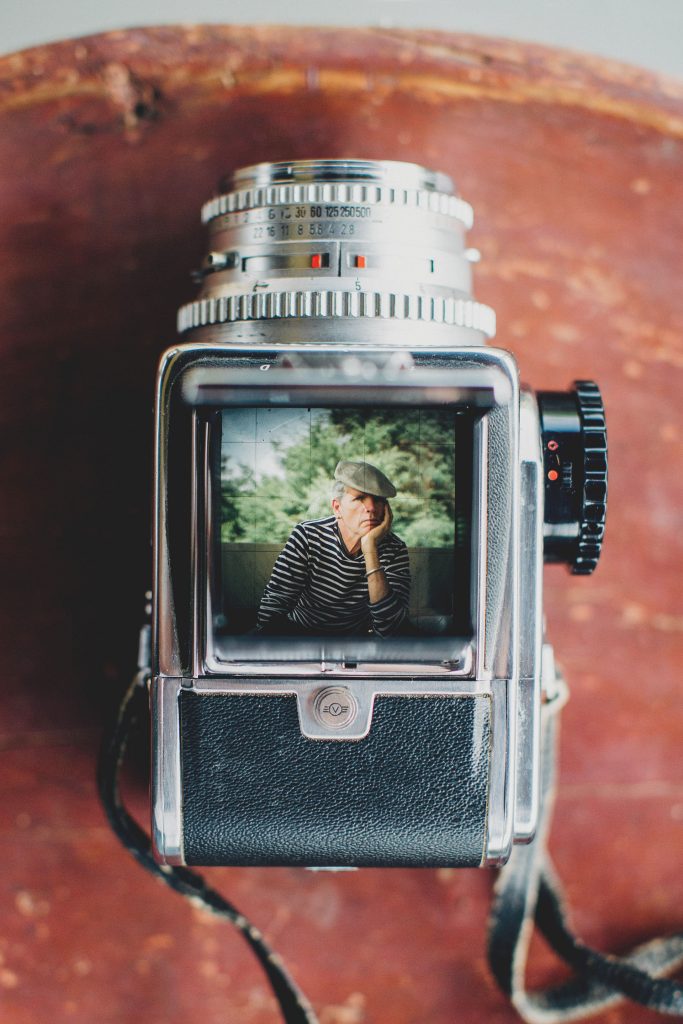 What do you think makes you skilled as a photographer?

I think the talent is in the printing. It took me years and years to learn. When I take a photo it’s not just the flash, it’s dodged and burned. I fingerpaint with light. That’s the skill element. Otherwise I’m not interested in wading through the technology to get to the image – that’s just the gesture line in paint. People should just get lost in the image and what it says to them.

Finally, leave us with some words of wisdom. 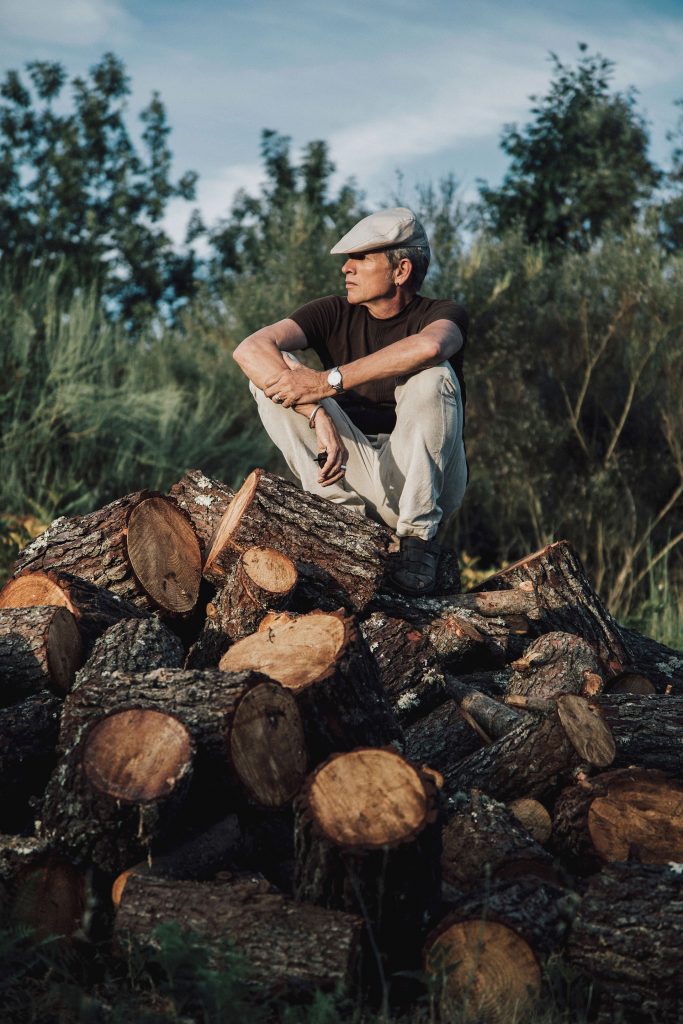 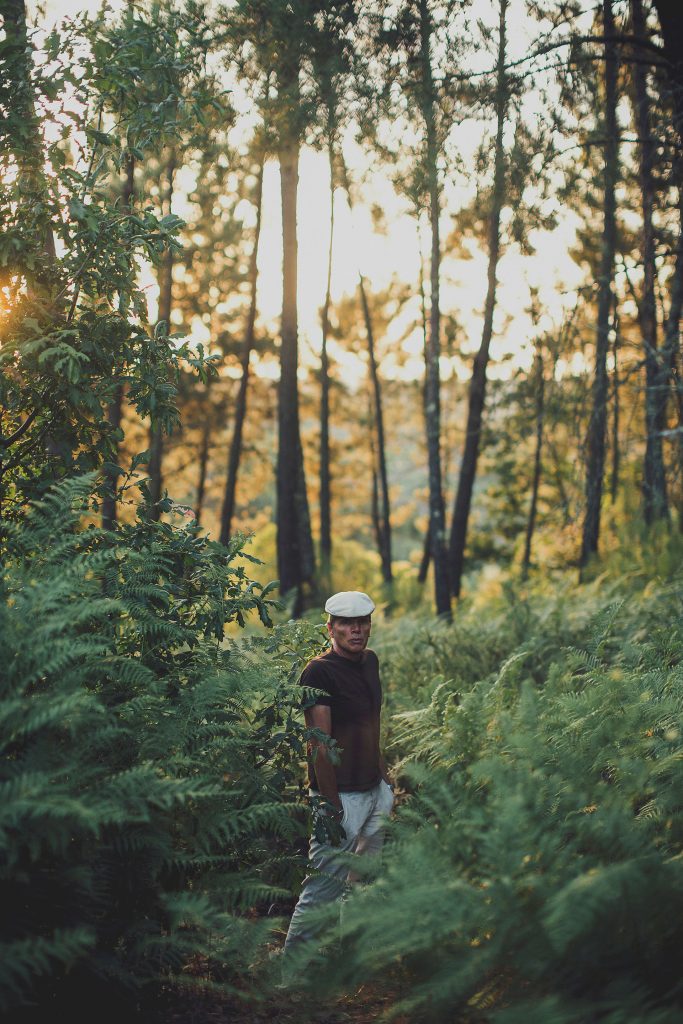 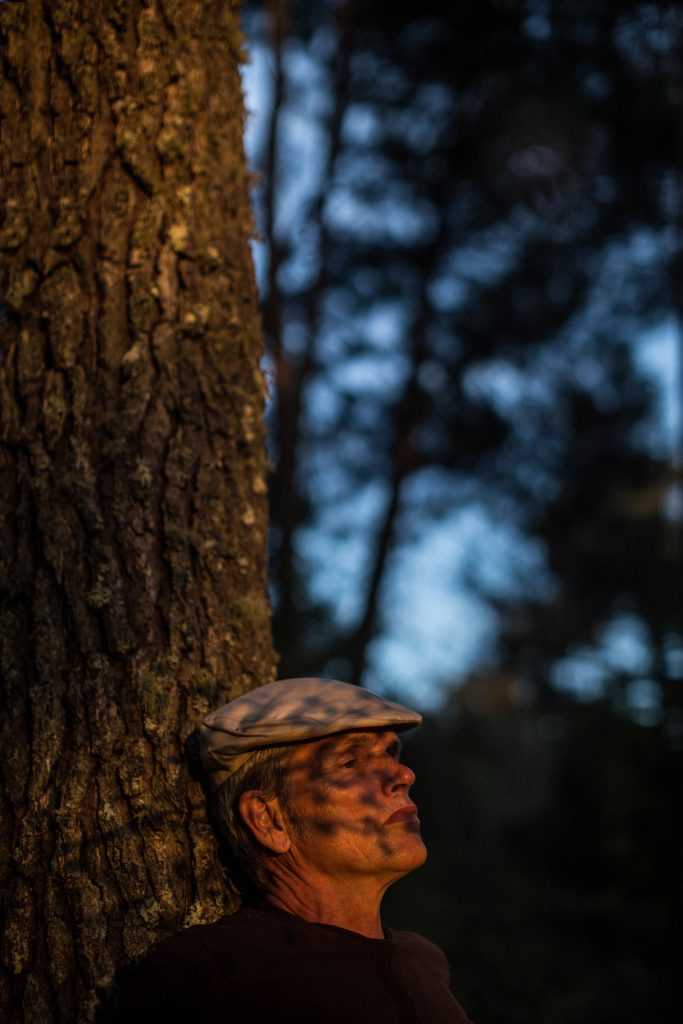 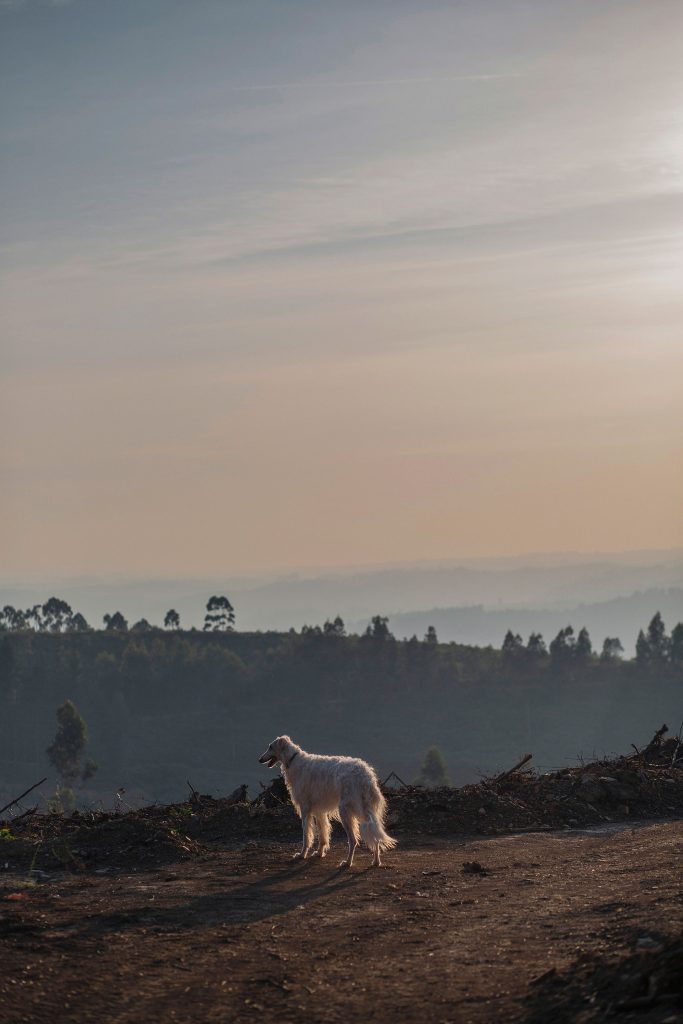 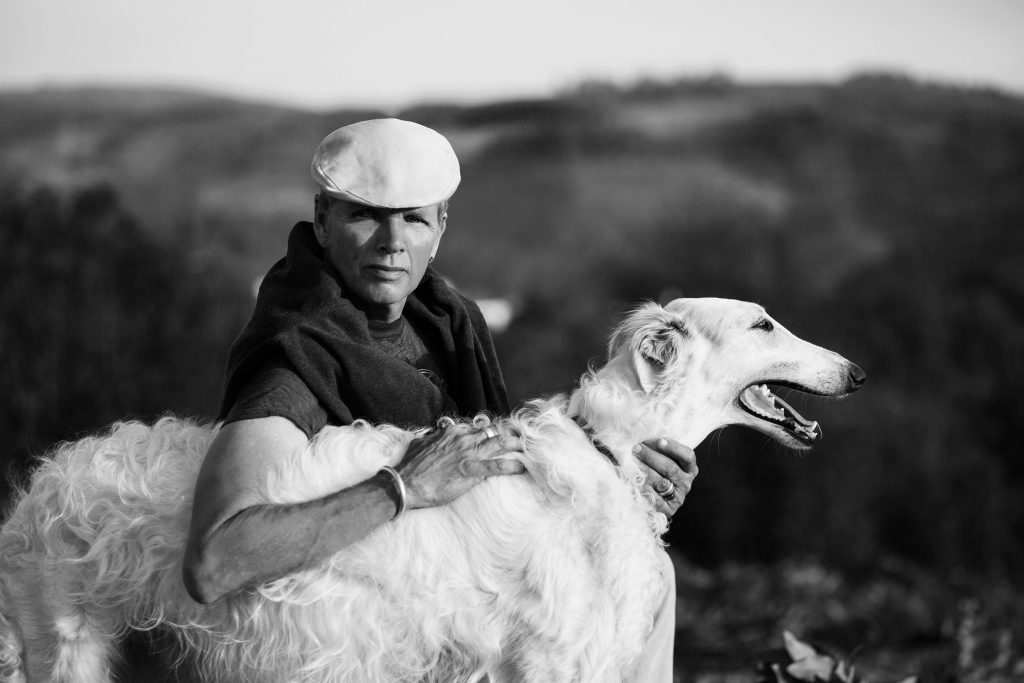