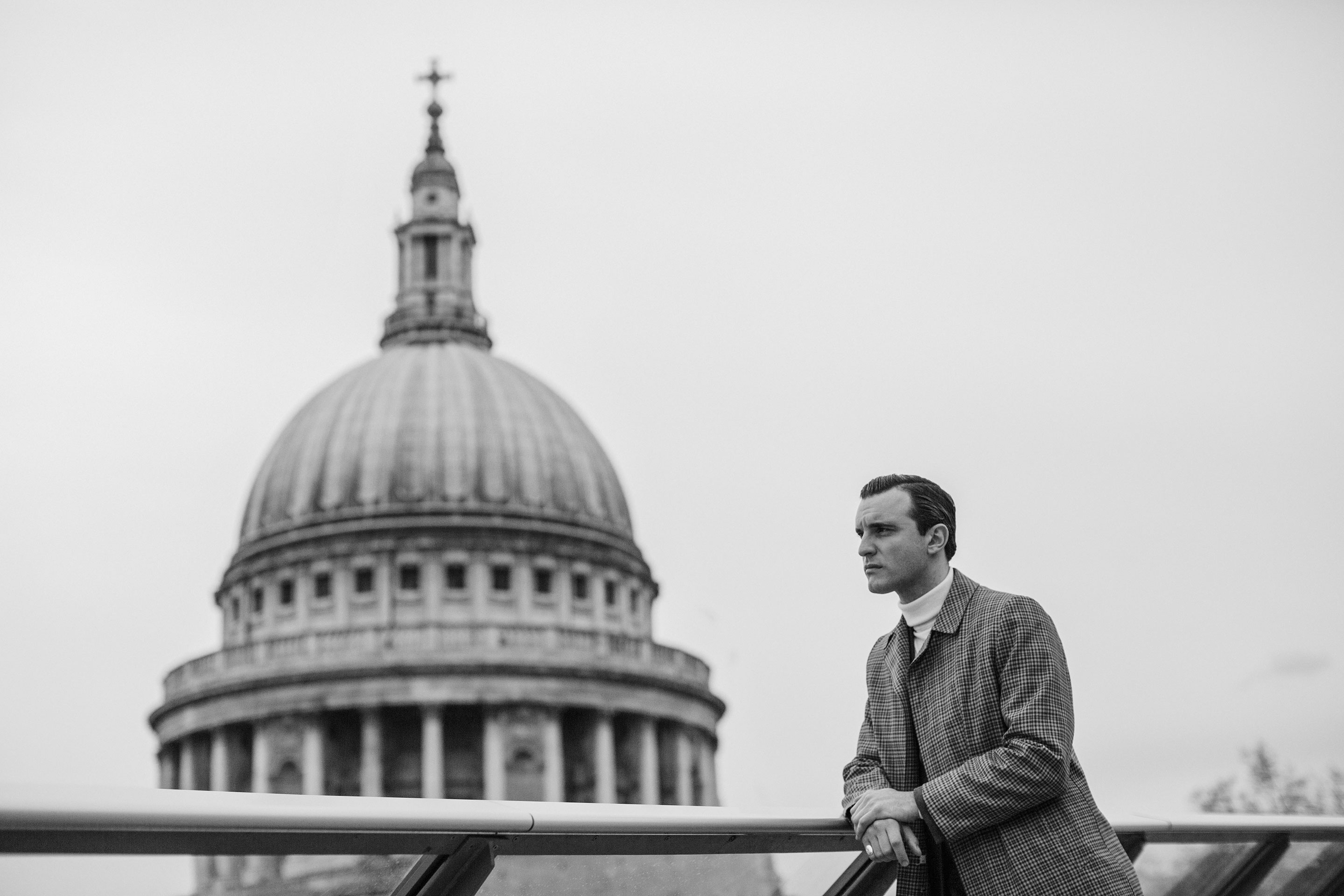 In 1961 James Baldwin wrote “Children have never been very good at listening to their elders, but they have never failed to imitate them.” This sentiment springs to mind for me when talking to another James, the London based tailor Mr Turner.

An incredible man to emulate with a sense of responsibility and pride, he spoke of his new role as a father with excitement, maturity and consideration. From an outside perspective I can see that if his little boy grows up to be anything like him, he’s bound to end up a gentleman, and with that sense of style he may just follow in his footsteps as a tailor also.

James Turner is a rare breed. He’s a born and bred Londoner, so to take advantage of this insider knowledge I photographed him around Bethnal Green, the area he grew up. On set we talked about the city’s ever changing landscape, life as a tailor and how having a son has changed his life. 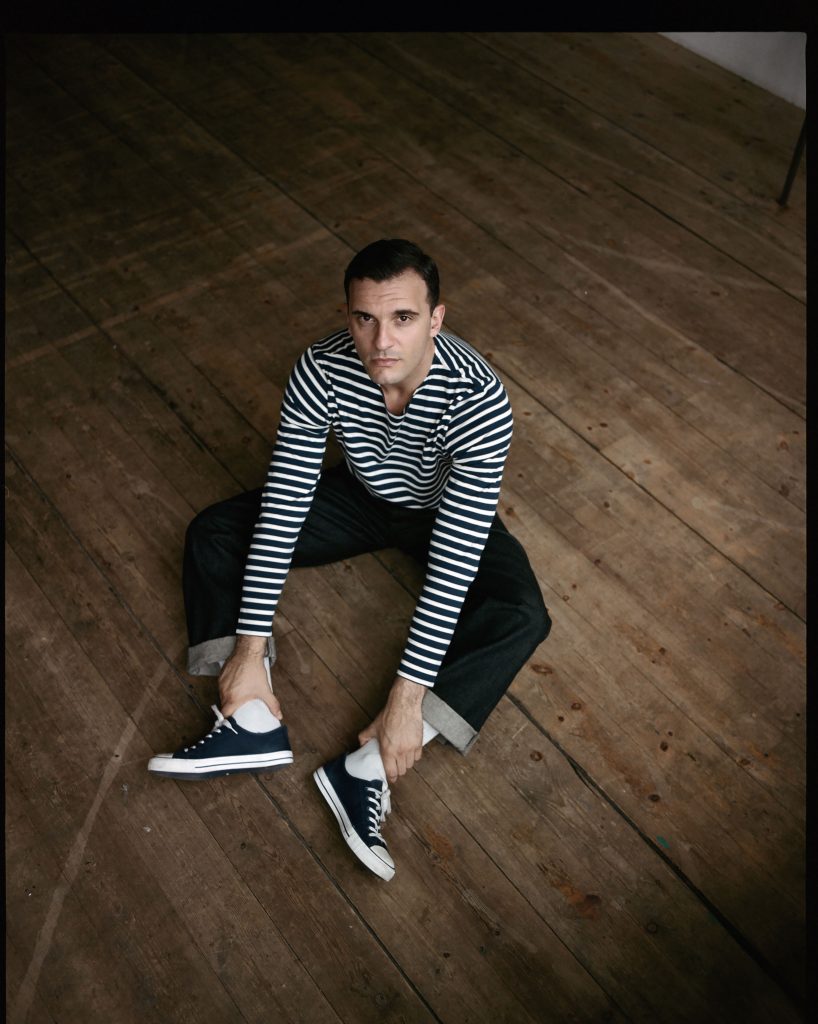 Sum yourself up in five words. Shaven, meticulous, driven, generous and humble.

What’s your star sign? I’m a Virgo. Apparently, that means I’m a perfectionist and very practical and hands on.

Where did you grow up? I was born in the east end of London in Mile End Hospital. I’ve lived in Poplar, Bethnal Green and then Hackney. Bethnal Green was probably the most memorable as we coincidentally lived in the same house as the Kray twins! There were always tourists outside.

What does it feel like to be a true Londoner? I feel as a Londoner, you know the values of hard work and respecting other cultures. In my primary school, I was in the minority as it was 80% Bengali. I’m open to all types of people and feel to live in London you have to have broad horizons.

What’s your first memory of London? Walking through Poplar market with my Grandad. I remember the smells and sounds, the fruit sellers shouting, stallholders chatting and the vibrancy of it all. I just knew this was the city for me. It’s funny we’re shooting very near the Museum of Childhood and I loved visiting there. It was such a regular occurance for me, heading down the Toy Museum as we called it. I didn’t go for many years as I grew up and then went on a date there a few years back. It has the exact same exhibts it had 20 years ago, I felt like I was stepping back in time. 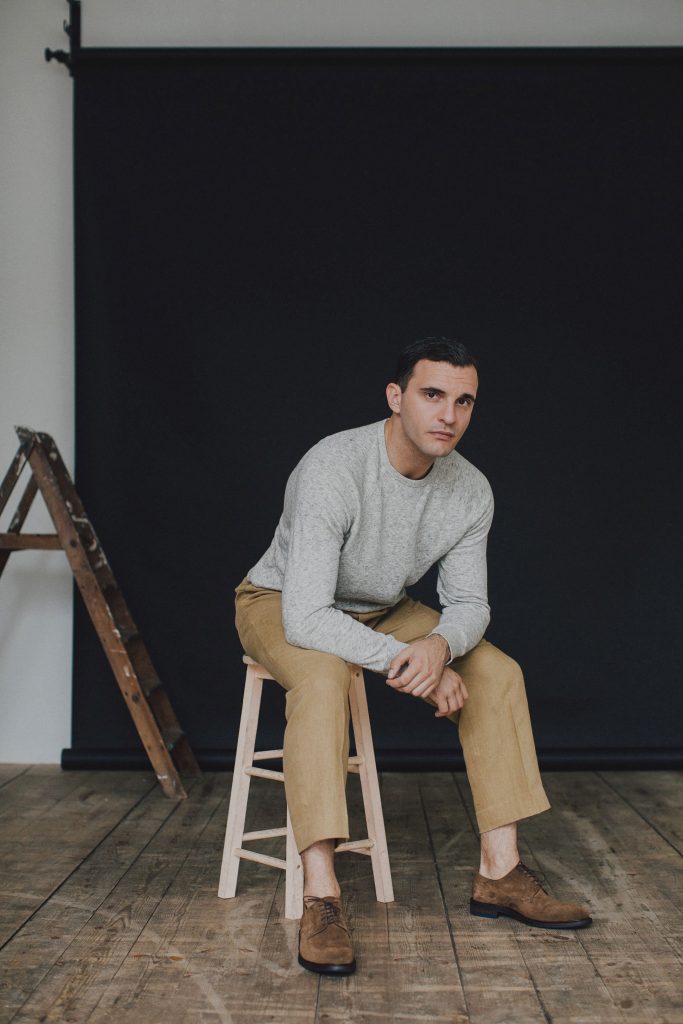 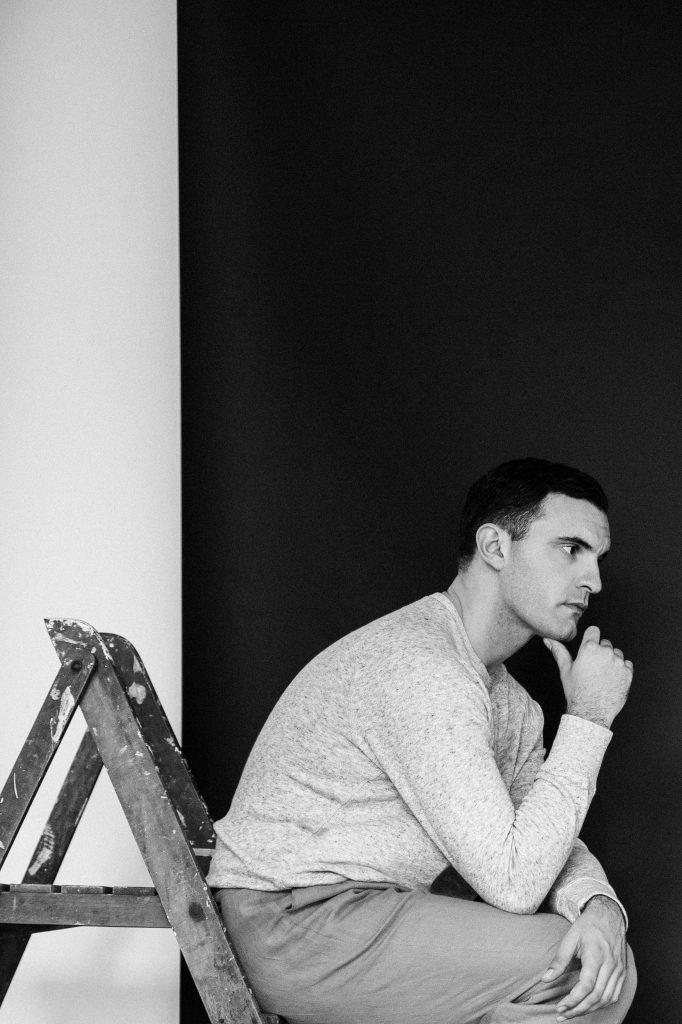 Favourite London street? Henrietta Street near Covent Garden. I’ve loved it for years but now with the menswear stores popping up and the brilliant restaurants I love it even more.

Favourite place for a night cap? My poison is always an Old Fashioned. Off Broadway near Broadway Market certainly do the best. I’m there a lot if anyone wants to buy me one.

Favourite Gallery? The Photographer’s Gallery off Oxford Street. There’s something special about photography that I get drawn into. I saw the Saul Leiter exhibition there recently which was outstanding.

What’s your favourite movie? On the Waterfront with Marlon Brando. Hollywood pre-50s was all about high society types whereas when the mid-century kicked, as the McCarthy Era was in full swing, it was time for the working classes to shine. This movie showed true working class Americans. Brando won an Oscar for it too.

What’s your favourite book? ‘Naked Lunch’ by William S Burroughs. I love the way he writes so vividly. 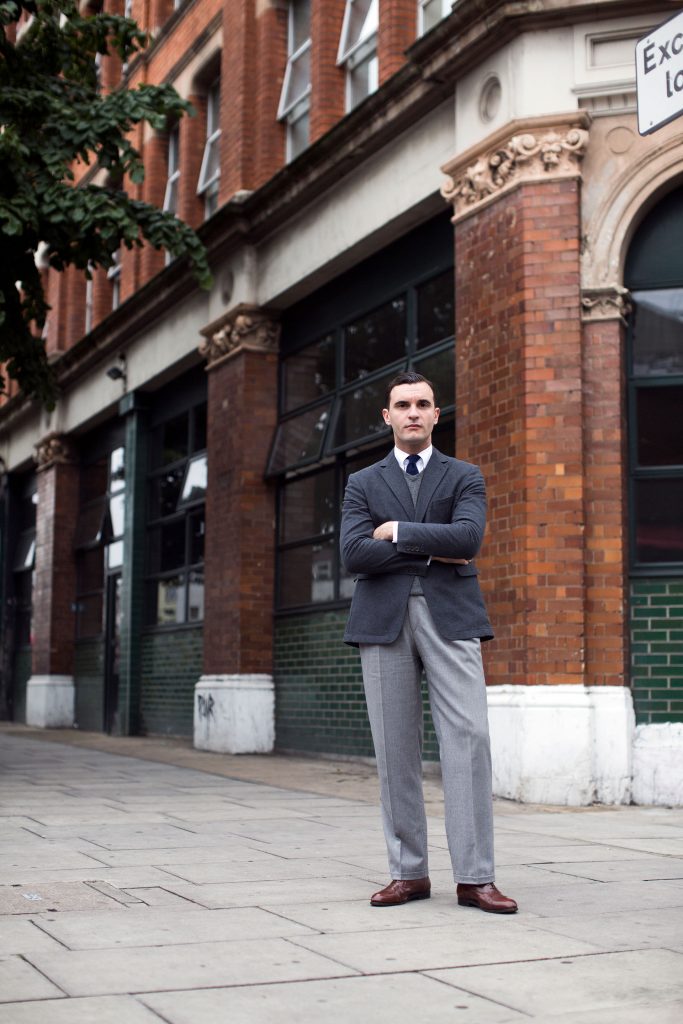 How did you end up as a tailor? I actually started by working in the City. I’d always loved clothes and I remember watching Hitchcock’s ‘Notorious’ when I was really small with my Grandfather. It featured Cary Grant and I became obsessed with how he elegantly glided across the screen in his outfits. It wasn’t about the story or the character, it was the moment captured in clothing that really struck me. After that I think I knew I had to work with them. There’s such a connection between a gentleman and his clothes. I started learning about how they were made with my Aunty who was a seamstress. We began with patterns and then looked at fittings which is what I predominantly do now. Its’ all grown from there really.

How would you succinctly describe your style? Matinee Idol. Classic with my own touches.

We shot with Boden today, what was your favourite piece? I really liked the crew collar sweatshirt. It’s soft, fit well and had a real Gene Kelly feel to it when I paired it with my bespoke linen pants.

Tell us about your inspirations. I’m not really a follower of fashion. I take a lot of inspiration from classic Hollywood. I love the way the men from that era could blend masculinity and elegance. Their grooming added to the power and strength they had on film. There’s a confidence in knowing and looking after yourself. 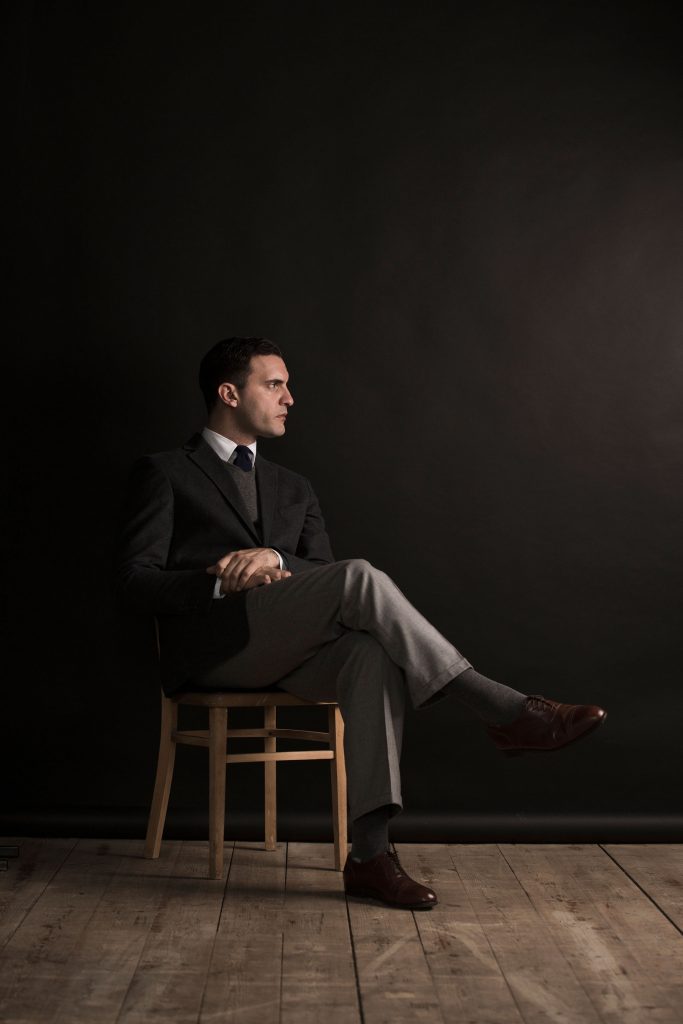 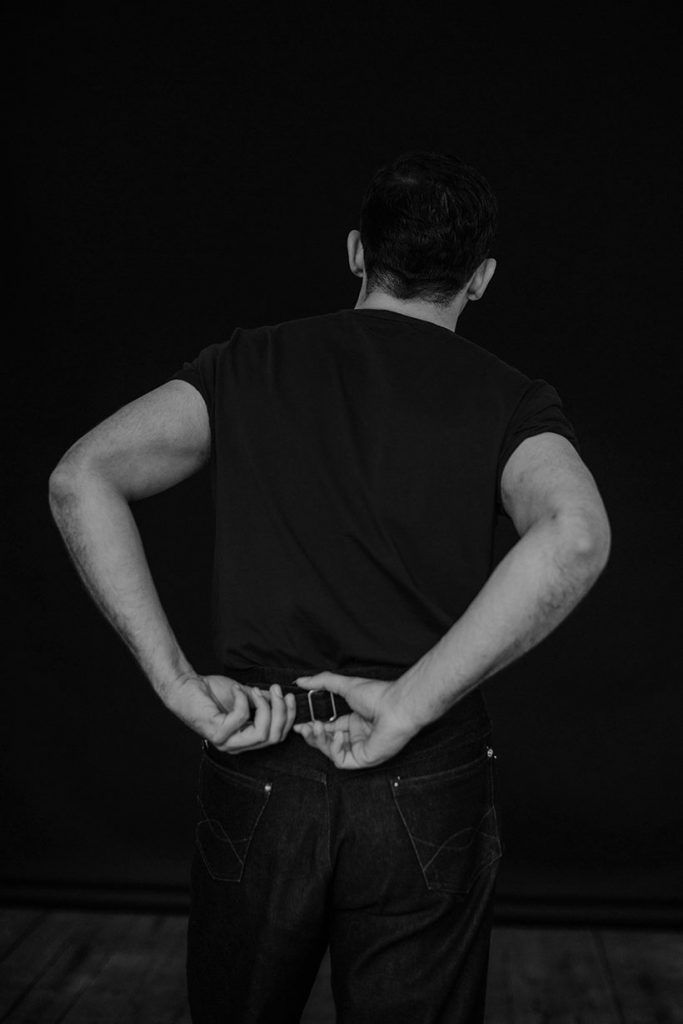 What sort of clients do you see most often? Is it stylish guys who want a custom wardrobe or men who need a little help? The trend is often fairly generic – a straight and narrow fit. I try and encourage people to go a little wider and to play with shape. A lot of people don’t know how to dress for their shape so I try and help with that. There’s been a focus on skin tight clothing over the past few years and I feel it’s definitely time to move away from that.

I travel often and really feel like London is quite distinct in the way people dress. What do you think is ‘London’ style? It’s fair to say that London is the most stylish city in the world. It’s traditional, there are military influences, it’s structured. Mostly, it’s timeless. That said, my style is a little more ‘classic American.’ I love denim, particularly how it transitioned from workwear in the 1950s into a casual staple through James Dean and Marlon Brando. The Brits created the sihouette of menswear as we know it today, but the Americans added a practical flair. I love how raw their style was and also how their outfits had longevity. The fabrication and construction needed to last.

You’re in the lucky position of being a new father, how does that feel? Were you prepared for everything that would throw up? It’s the best feeling in the world! It’s definitely a huge responsibility. There are two to think about now, in everything you do. It’s been such a pleasure to share that headspace and live a less selfish life. I come from a big east-end family and there were always children around so children has always been part of my life plan.  my mind. It’s amazing to have a little one of my own. 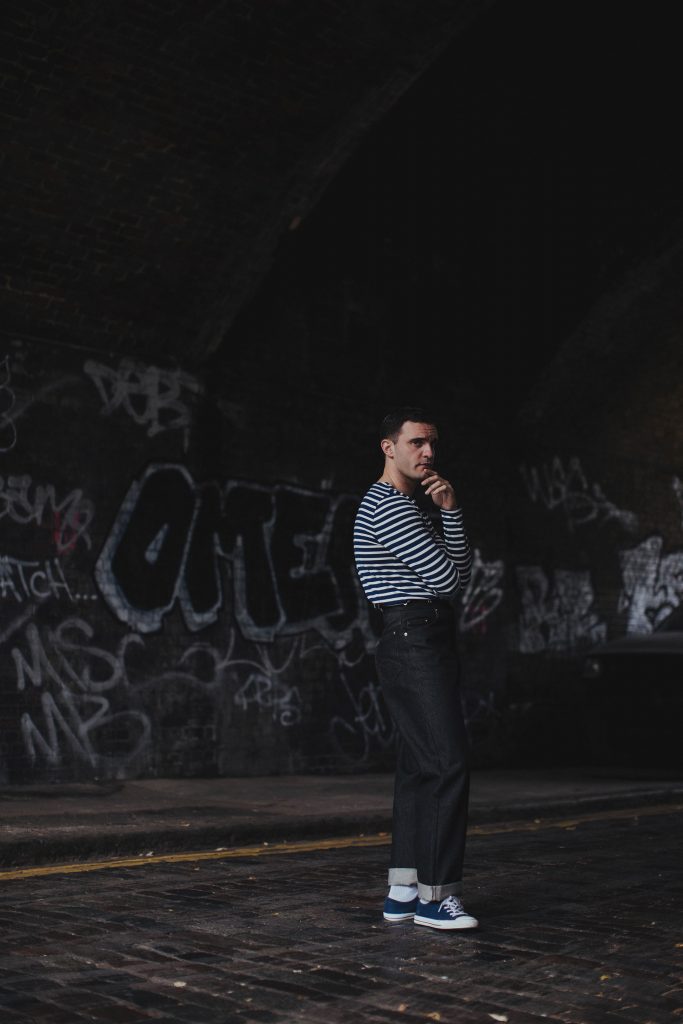 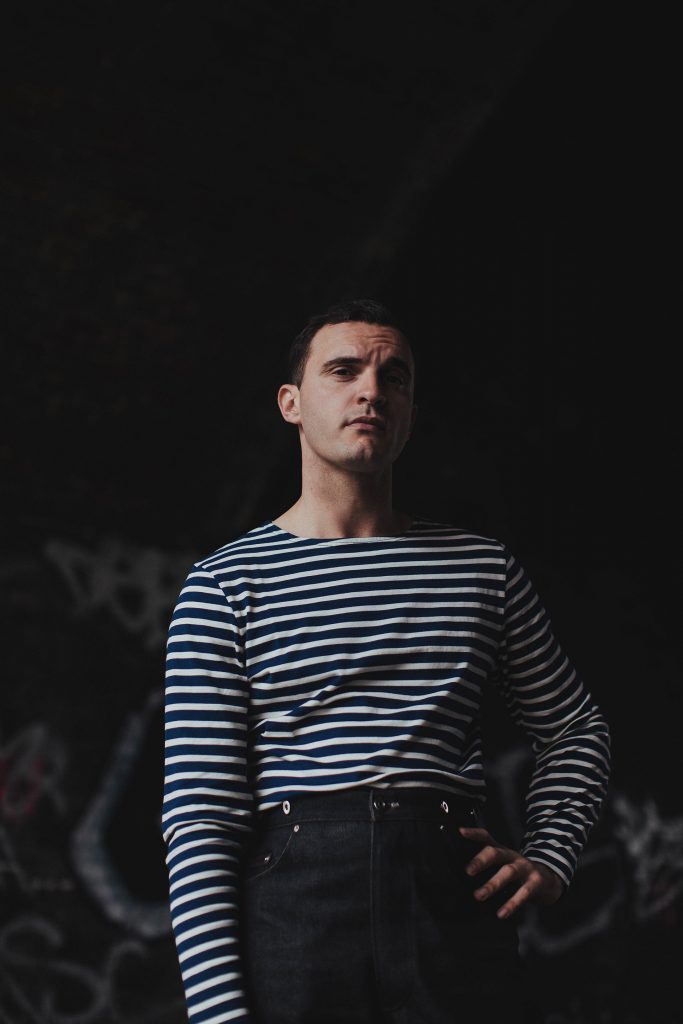 How has being a father changed the way you look at yourself and the world? Being a father definitely makes me look at myself as more of an adult. I suppose with a lot of guys whether they like to admit it or not, you are stuck in a perpetually child like state of mind but becoming a father most certainly makes you grow the hell up. I now see almost everything as a potential experience that I could share with my son. Whether it’s watching a West Ham match, going to see a movie or just walking down a street in The East End. It all feels like something I can one day do with him too.

Do you have aspirations for him or is it too early to say? All I want is for him to be happy and to be well-mannered. Have those and the rest will come. Manners do maketh the man.

What advice would you give your 18 year old self? Don’t smoke!

Any words of wisdom? A man isn’t a man unless he’s a gentleman. 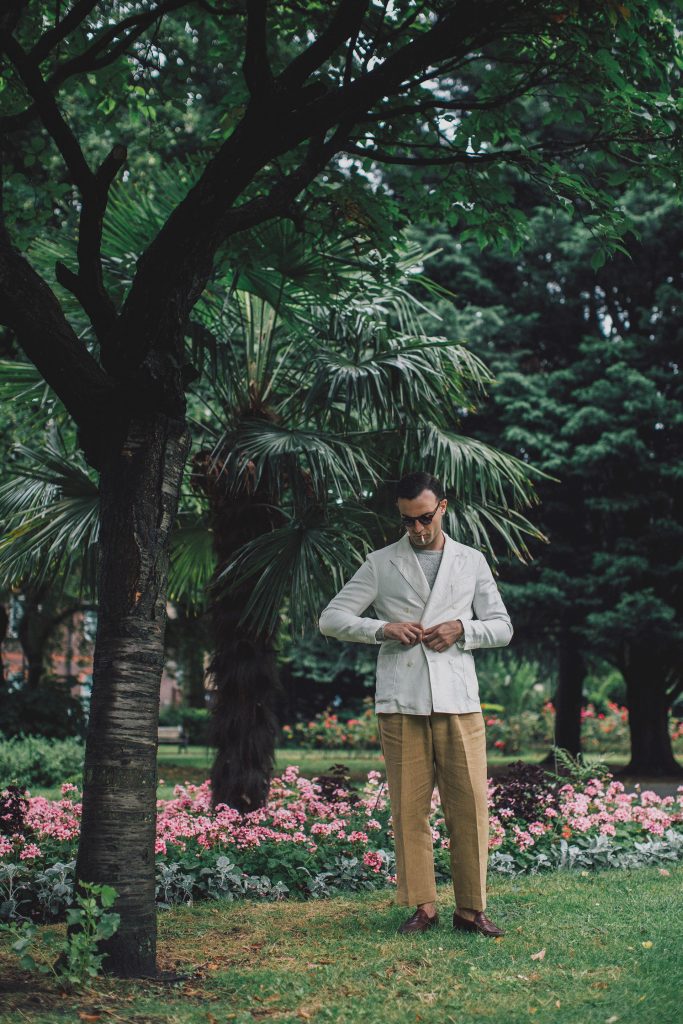 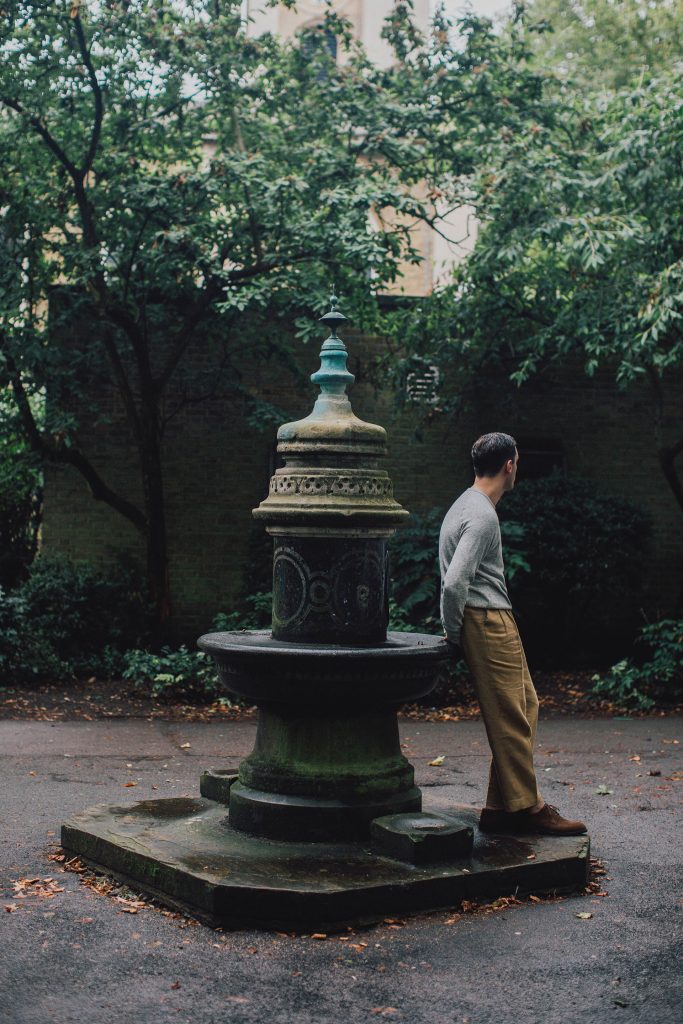 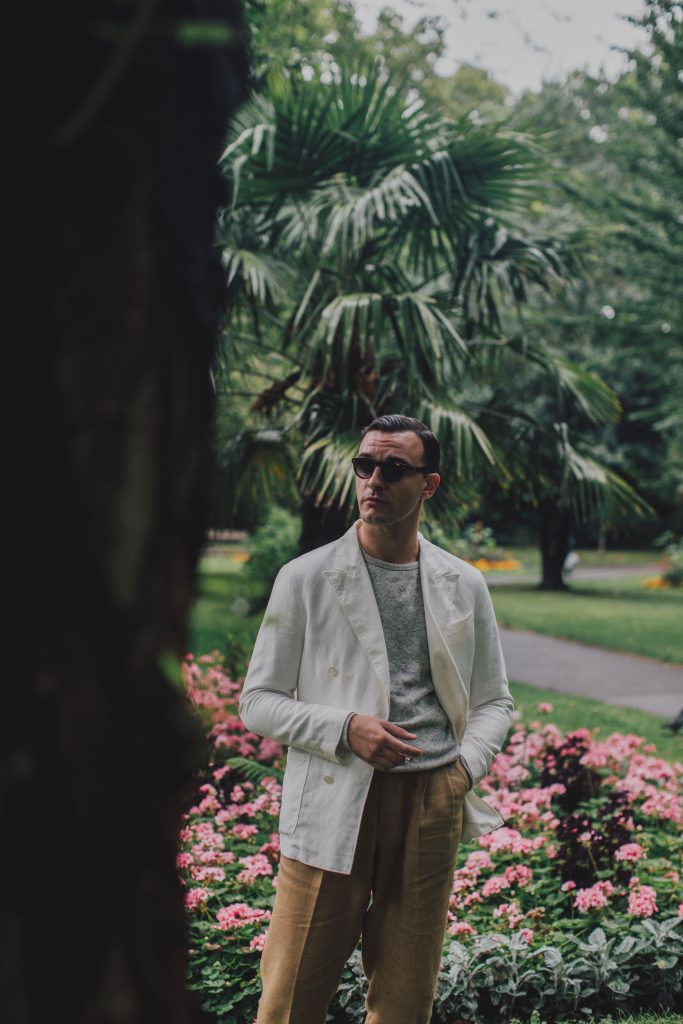 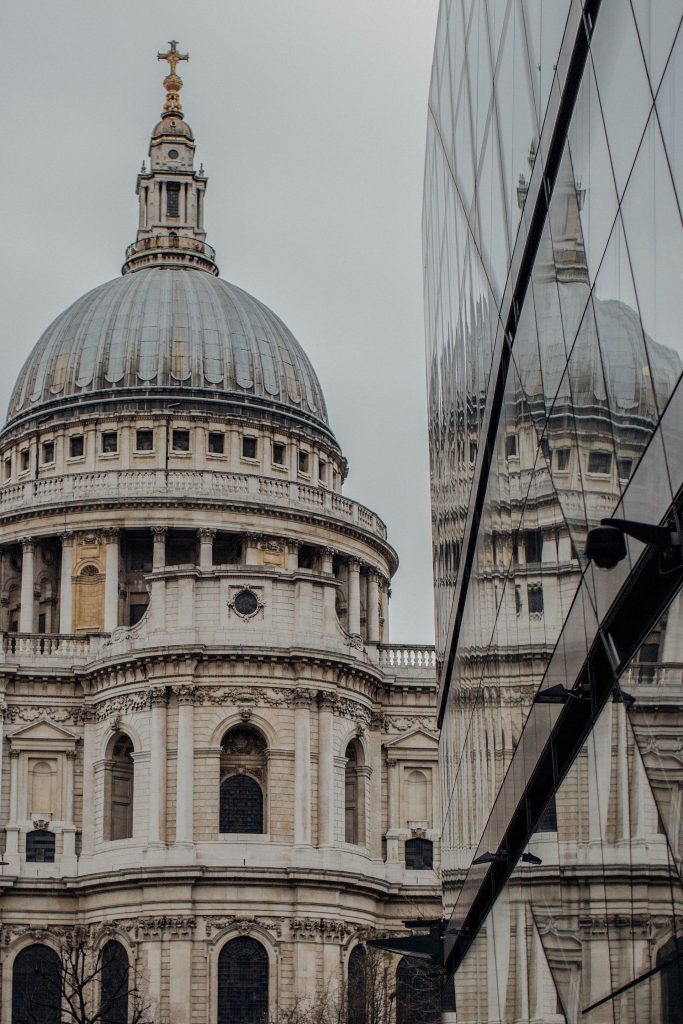 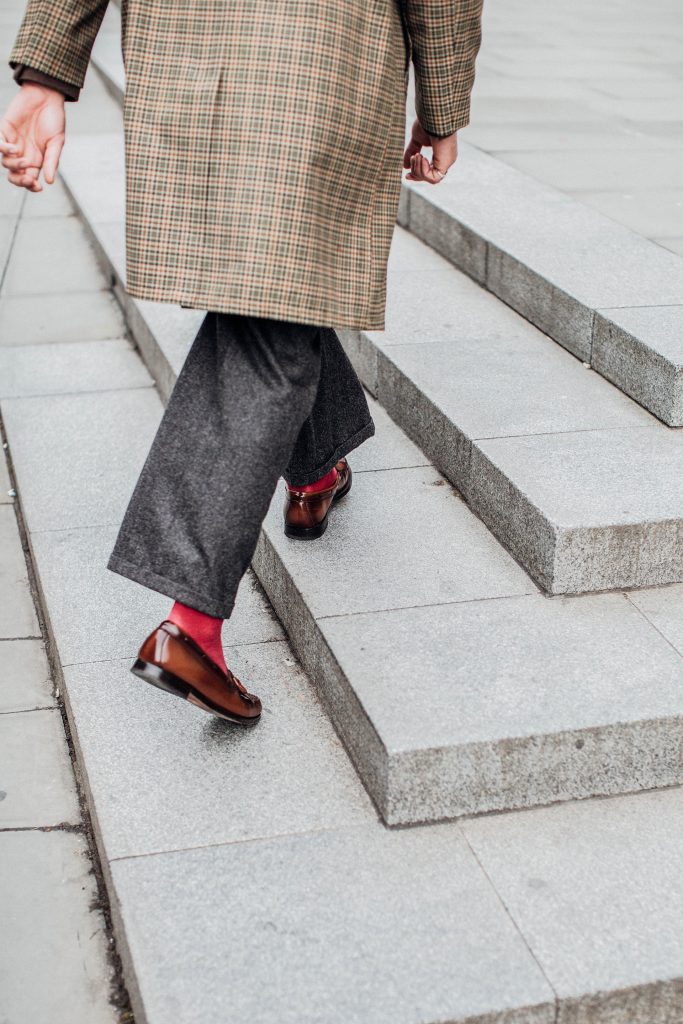 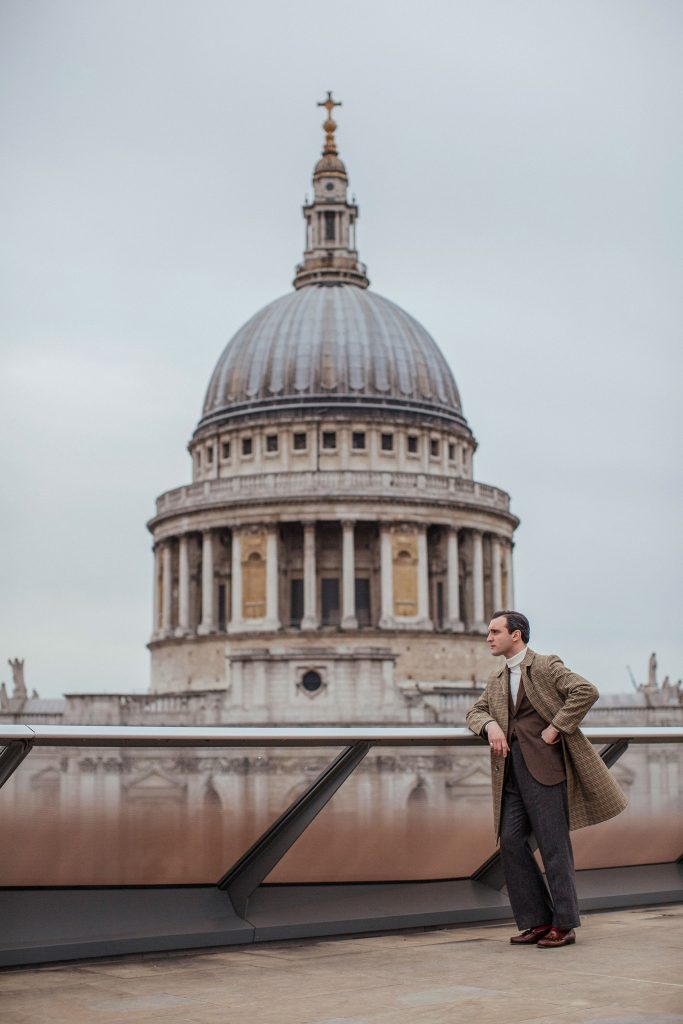 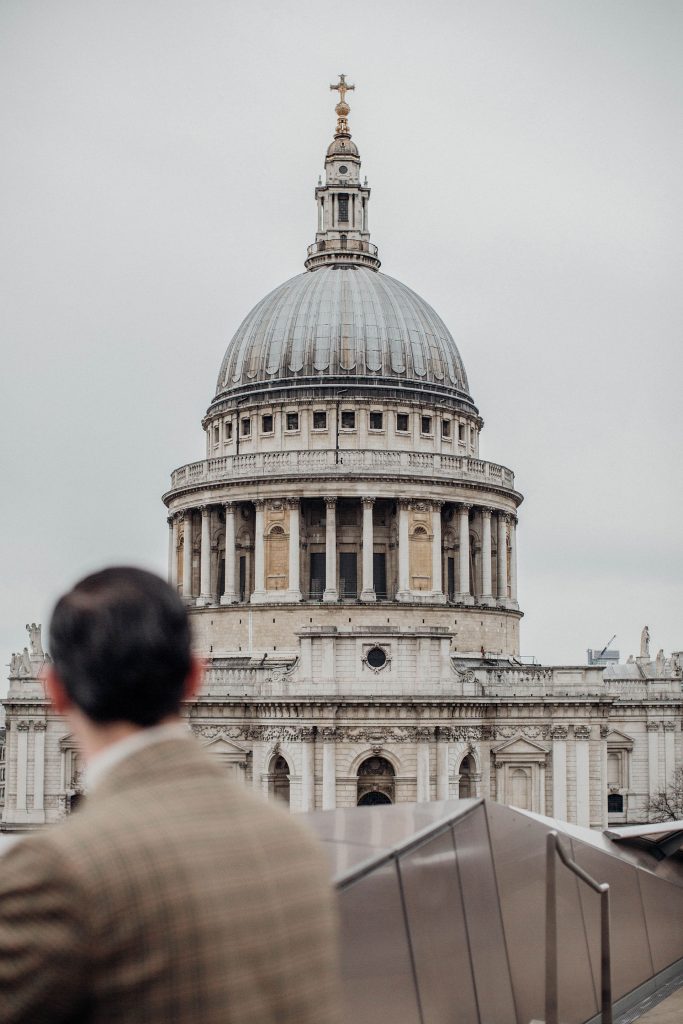